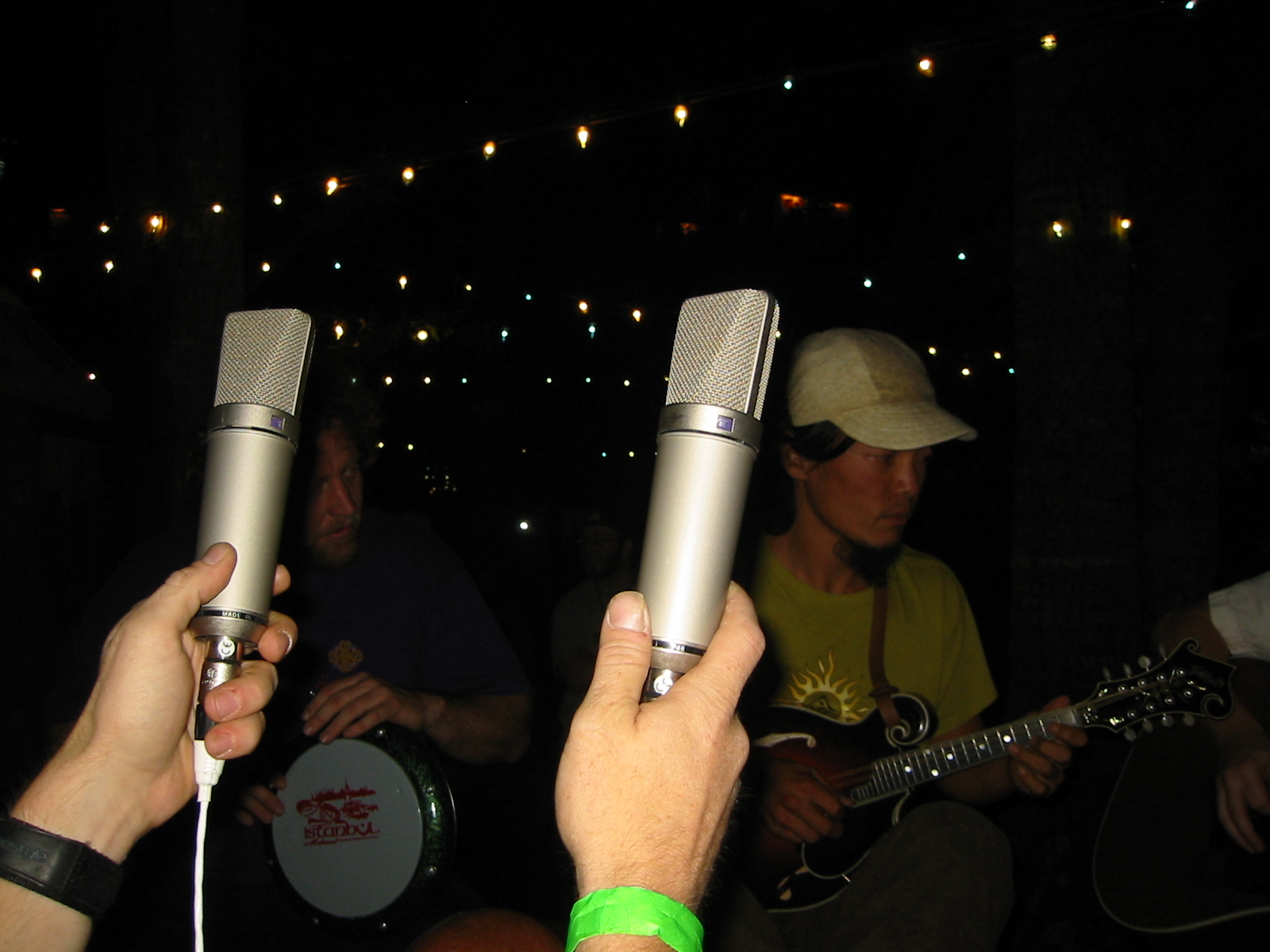 This was an impromptu, unannounced, acoustic set outside of

the Myrtle Beach House of Blues. There was no amplification

and were no other tapers. We just happened to be the last

tapers to leave and walked out about 2 songs into the set.

We set up a minimal recording rig and handheld the microphones.

We started about 6 people back from the trio but were

slowly pushed forward to the front of the crowd.

This is not a flawless recording! It takes about a 1.5 minutes

loud, then drop. There is static while the levels are adjusted

to 0. After the first 1.5 minutes, the levels are great other

than the crowd cheering between songs, which I chose not to

Reviewer: yjmarc - favoritefavoritefavoritefavoritefavorite - May 1, 2006
Subject: 10/21/05
great show! can someone please please post the show from 10/21/05 from the fox in atlanta? thanks!
Reviewer: YossarianHunter - favoritefavoritefavoritefavorite - April 24, 2006
Subject: Hang In there, it's worth the ride!!
It takes a minute or three to get the feel, but if you will just give it a chance, this is a great recording. No, it's not perfect. Yes, the crowd is annoying at times. But if you get past that, there are some incredible moments to behold in this little set. The sing-along vibe of Redemption Song and Barstool is awesome. The rare 2 chorus version of Little Hands is a treat. Totally acoustic, unamplified music is a challenge to record, and overall I think these cats rose to the occasion. If you've ever attended an acoustic set, you know that the shhhhs are inevitable. Just the fact that anything at all made it onto tape from this gem is a true miracle. Lighten up and Enjoy!!!
Reviewer: Dave Harryman - favoritefavoritefavoritefavorite - February 2, 2006
Subject: Made a good show a great one!!
This was on the bar outside the House of Blues. The crowd grew from 15 or so to several hundred including along the railing above at the restaurant beside the venue. I got there for what I was told was the end of the first song. It was an instrumental I didn't know off the top of my head, and there's no recording to check, so I guess we'll never know unless someone else recognized it. Then they did Hobo Song, followed by the Texas Town that starts this recording. The instrumental before Little Hands is Minor Swing. Also, Little Hands was performed in the 1995 studio recording arrangement, with the end being a final "800 years" chorus. This is the first time they've played that arrangement live. Think What You've Done is the name of Pain and Sorrow, and it was nice to see it again. The Best Feeling is played for incessant audience request. Many of those requests came in the middle of songs! The crowd was a bit annoying for an unplugged set. Luckily, people let the taper move forward until he was right in front of Mike. This set made the night an incredible experience after a slow start to the first set, and a weird encore. The crowd is very loud on the recording, but that's unavoidable, it's still absolutely worth the download for this incredibly rare treat that could easily have been lost, but luckily it was captured on tape!
Reviewer: Calicheezer - favorite - December 17, 2005
Subject: Download
I downloaded this show
It seemed like a great set
The crowd was yelling right into the mic
people were making the shhhh !!!!! noise
A good audience recording is great, however
this was totally annoying. I could not make it through even one song
I bet it was great to be there live